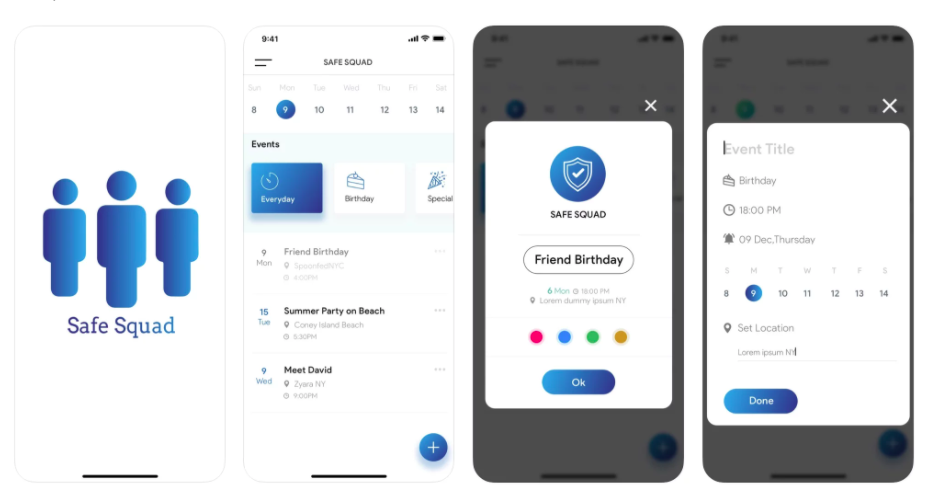 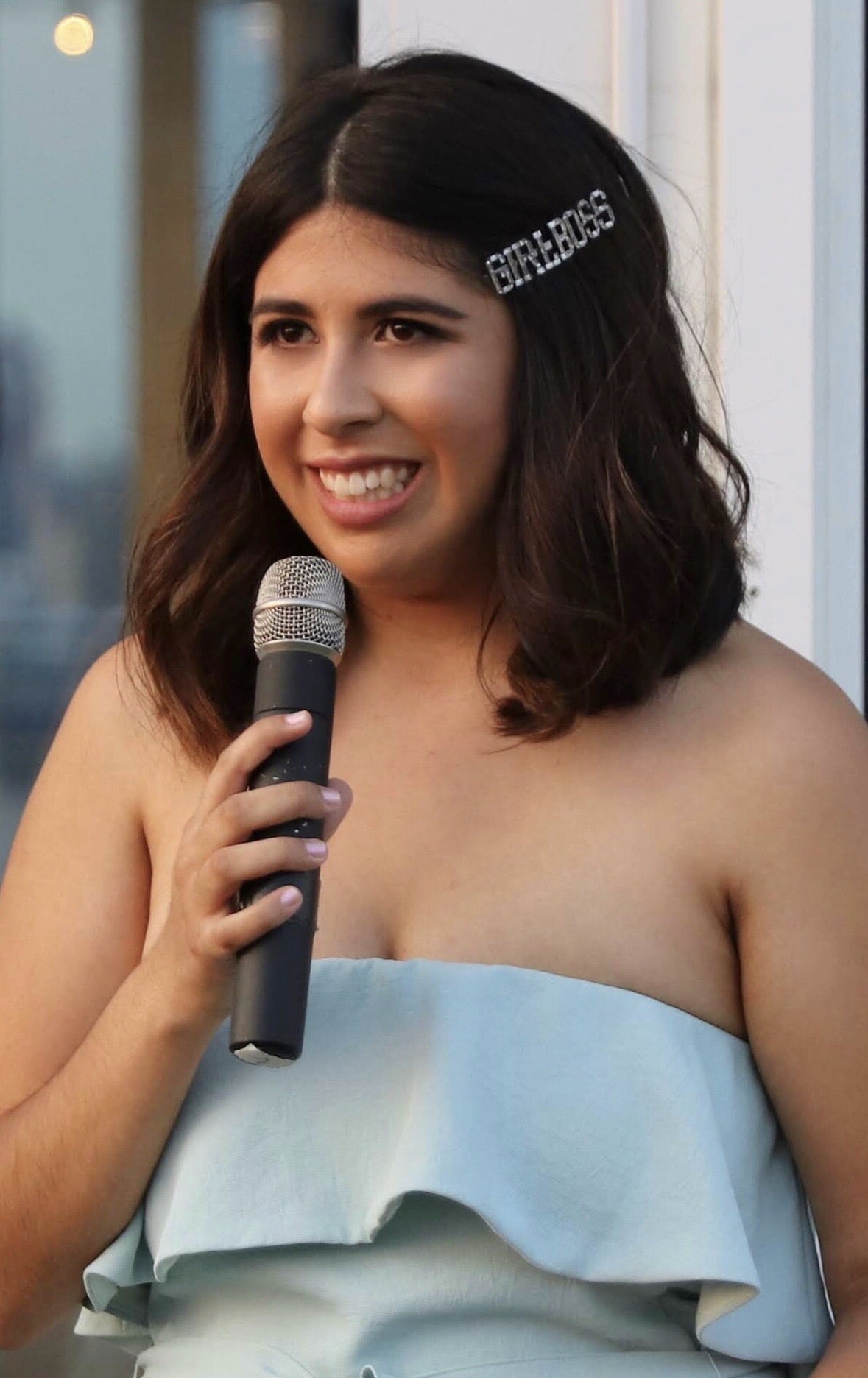 “It’s a club that no one should belong to,” Mercedes Molloy, a 19-year-old sexual assault survivor, activist, and student at The New School in New York City, told POPSUGAR. In a country where every 73 seconds, a person is sexually assaulted, according to RAINN statistics, Molloy doesn’t want to see anyone — of any gender, race, or sexual identity — become another statistic. So with no formal tech background, she created the Safe Squad app, as well as a community of fellow survivors to uplift and look out for one another, in an effort to prevent other people from having to say #MeToo.

The idea started with just a Sharpie and a legal pad not long after Molloy was raped at age 13, when there was no Women’s March or #MeToo movement where she could convene with other survivors. In simply trying to survive in public after experiencing this trauma, Molloy searched among a sea of smartphone safety apps for one to download. She found that most were quite obviously safety apps in appearance, were charging membership costs or fees to download, and were targeting just one demographic: women. Molloy wondered about developing an app that could help keep people safe, while being discreet and intersectional — inclusive and accessible to people of all genders, sexual orientations, and socioeconomic backgrounds — and jotted down her thoughts.

“The healing process isn’t linear; it’s filled with ups and downs and there shouldn’t be any stipulations of timeframe on that,” Molloy said.

She wasn’t ready to share her story or move forward with the idea just yet though, so she put it on the back burner for a couple of years, wanting to focus on school. “The healing process isn’t linear; it’s filled with ups and downs and there shouldn’t be any stipulations of timeframe on that,” Molloy said. She explained that coming forward with her story and developing the app was her way of taking back her life and changing her own narrative from one of anger and hurt to one of advocacy for survivors. So she delved into working on the app in 2018, after connecting with a mentor from her native Silicon Valley, and officially launched Safe Squad in the summer of 2019, with the help of her mentor and just a few high school and college interns.

The idea of the Safe Squad app is that it doesn’t blatantly look like a safety app, so that perpetrators of violence don’t recognize it as such. It’s designed to look like a calendar where you can input the time and location of an event you’re attending, like a party or a date. But unlike other apps that allow friends to keep tabs on each other’s whereabouts, “Safe Squad is not a location services app, as the reality is that not everyone wants to be constantly monitored or tracked,” especially if they’re concerned about an abuser tracking them down, Molloy explained. Along with event details, you’re also required to enter five emergency contacts, who become your “squad.”

Then, at the end of an event, the app reminds you to let your squad know that you’re safe by verifying your identity using a color-safe code. (The sequence of colors, specific to the user, is more difficult to hack than a four-digit passcode, Molloy said.) If you key in the color code incorrectly, the SOS messaging system on the app presumes something is wrong — like someone taking your phone who shouldn’t have it — and sends out a message to everyone in your squad alerting them of your last location. If your phone dies before you can alert your emergency contacts that you’re safe, the app will let them know your phone is dead and where you were last. 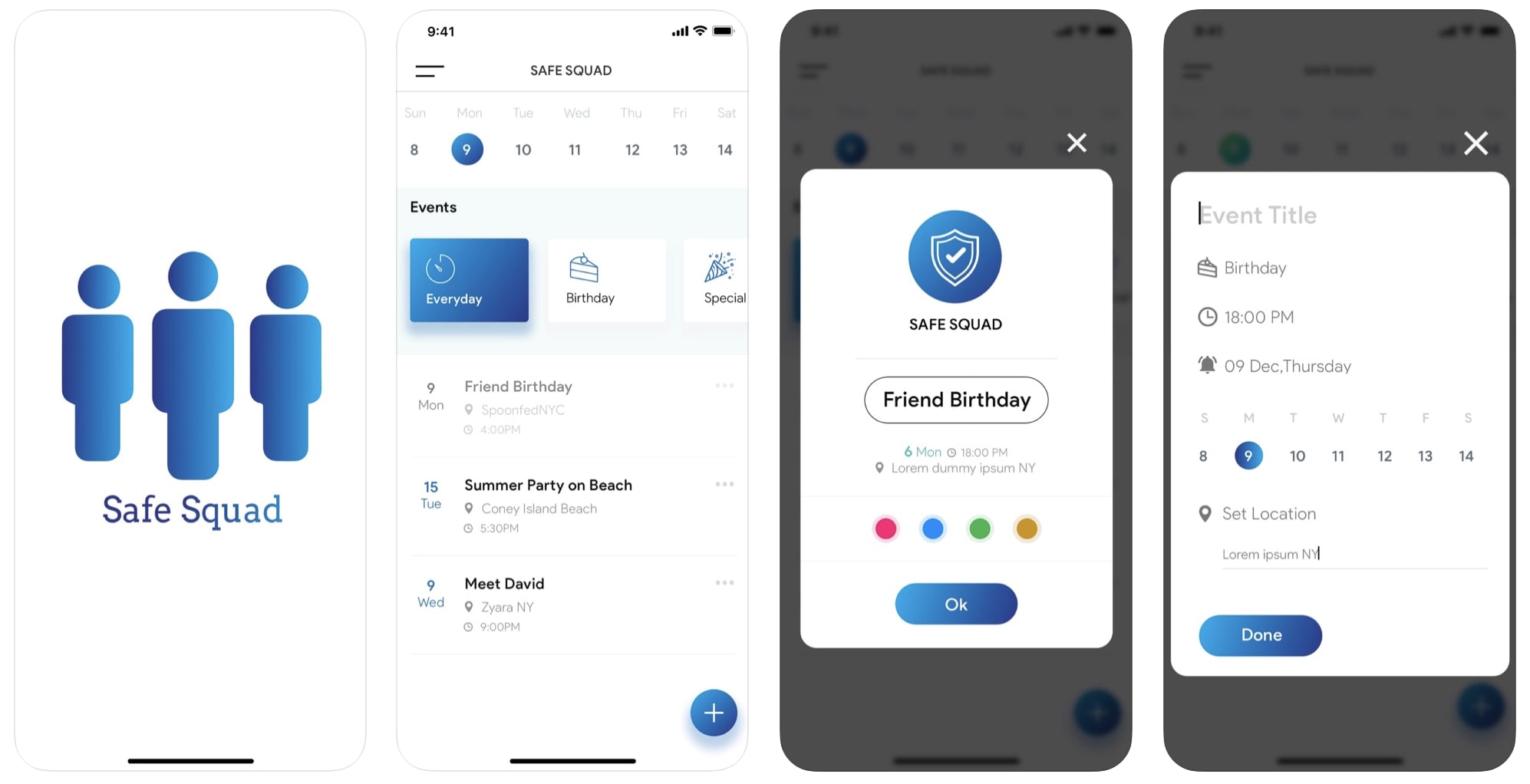 Molloy explained that the app is commonly used not only for college bar-hopping (pre-COVID-19, of course), but recently, for Black Lives Matter protests, too. Protestors can let their chosen five family members or friends on the app know where they’ll be during the protest, and then count on the app to update their squad if for some reason they get separated from their group, injured, or arrested, and can’t key in their safety.

While Safe Squad is geared towards giving people and their loved ones peace of mind, you can’t help but think that it’s potentially saving lives as well. In June, 19-year-old Black woman and Black Lives Matter activist Toyin Salau tweeted a series of posts warning that she had been sexually assaulted before going missing and later being found dead. Tragedies like this are not uncommon. The Institute For Women’s Policy Research states that 20 percent of Black women experience sexual violence in their lifetimes. “Toyin’s story serves as a greater call for action,” Molloy told POPSUGAR. “There is a disproportionate effect [of sexual assault] on women of color, and we as a community need to work together to implement protective systems and resources, including Safe Squad, to fight these wrongdoings that Black women face on a daily basis.” Molloy designed the app with the security of those who have already survived trauma, even repeatedly, in mind.

Why There’s Power in Building a Community

While it’s important for trauma survivors to be mindful of their triggers and take steps to combat them — especially in this climate — it’s equally important to check in with loved ones and create a safety plan for yourself, explained Julia Childs, MSW, a trauma therapist at Peace Over Violence in Los Angeles. With her own clients, Childs organizes safety plans that name multiple emergency contacts and the easiest ways those people can be reached, by either the patient or someone else, in an emergency. The Safe Squad concept similarly cultivates a sense of safety for survivors. “Having a community of people you trust and feel safe with, you can start to push forward in a way that you wouldn’t if you felt isolated,” Childs told POPSUGAR.

Jessica, who declined to give her last name, suffered continued abuse from an intimate partner. She explained that the feeling of safety in numbers is comforting for survivors of any type of violence. “Community is the most important thing for someone going through something like this. An abuser often isolates you and may make sure you have no contact with family, friends, and people who love you,” she said. As someone who’s had an abuser try to control her digital habits, she appreciates the privacy and discretion of the Safe Squad app. Having routine check-ins is key, too, Jessica explained, so that loved ones can spot any warning signs before a relationship escalates to violence.

“An abuser often isolates you and may make sure you have no contact with family, friends, and people who love you,” Jessica said.

In creating the safe space of the app, Molloy has also created the Safe Squad community, both through social media and in-person events like the Safe Squad survivor makeover event, sponsored by Sephora last year. These circles are so crucial for survivors. “The healing and rebuilding aspect of it is more difficult than surviving,” Jessica told POPSUGAR. “You’re unlearning everything that you’ve been taught during abuse, and rewriting your story however you want.”

Meeting fellow survivors can be fulfilling, because just being in a room with people who have had similar experiences often feels familiar and affirming, Childs explained. “Empowerment comes from looking around and saying, ‘It’s not just me who has gone through this, and there is a path forward,'” Childs said. While trauma can make people feel like they’ve lost their power, that’s not true. “Someone just made them believe they’ve lost their power,” Childs explained. But she doesn’t “give survivors power” in her therapy sessions. It’s about helping people access their sense of self again, and being present in a community of other survivors can be really powerful for tapping into that.

But empowerment and security is just as important in your smaller circle of family and friends. If you’re not a survivor, hold space for one and show up for one, Childs urged — and if you are, cultivating your safety squad to check in with regularly will help improve your well-being. “Identify those who feel safe in your life, and know that you’re not alone,” she said.

Molloy recalls the skittishness of her early days in New York City, after she moved there for college. Before she launched the app, she often found herself sitting only with other women on the subway, and constantly checking behind her to see who might be lurking near her. Of course, she’s still a proponent of being hyper-aware of your surroundings, but she feels more secure knowing she has a community of people behind her, beyond just her squad of five people in the app interface. Now, she feels comfortable enough to dip her toes in the dating pool, something that she likely wouldn’t have done as a survivor without Safe Squad. “It’s more than just an app. It’s a community of people that gives you confidence, always knowing that someone has your back,” Molloy said. And likewise, she has theirs, too.

If you or someone you know would like to speak with someone who is trained to assist sexual assault survivors, please call the National Sexual Assault Hotline at 1-800-656-4673.